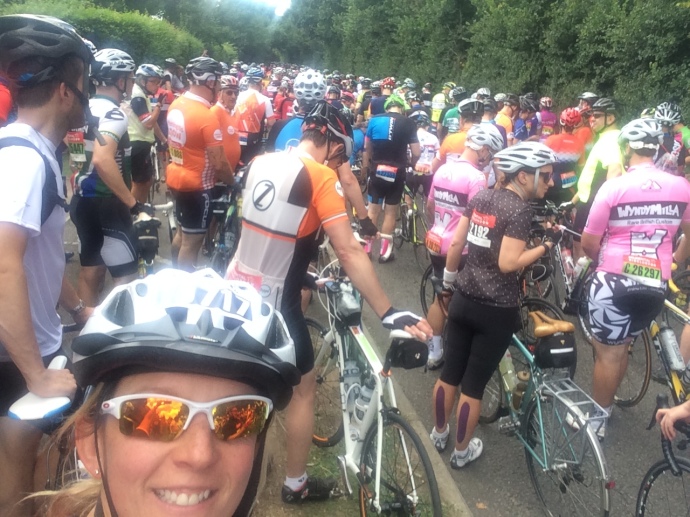 ZAAZEE founder Deborah Todd shares her experience of completing this year's Ride London! The world's largest festival of cycling. A 100-mile journey no less! What a fabulous achievement, here's her story...

A car-free bike ride in one of the greatest cities ever? Yes please! I love cycling. I love the freedom.

It started last year at an event with British Cycling and I heard Ride London wanted more women to take part. I thought that’s an event for me!

I pushed the event to the back of my mind after posting the form. It  wouldn’t be a reality unless I got in, so nothing to worry about just yet. When my entry was confirmed I was thrilled, yet nervous. I was in, but it was still a way off - so still no need to start formally  training.

Then with less than a month before the event I knew I had to get on with it. 100 miles was a serious distance and knew in the back of my head it would be much harder then Skyride, an event the family and I attend annually. Completing the course in the event time was a serious commitment. I borrowed a road bike and upped my gym time from 1-2 times to 4-5 times. Started running and doing interval training and increased my swimming. 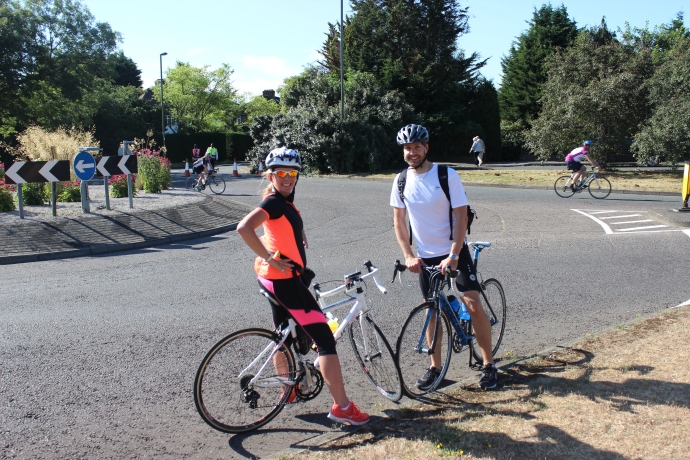 I did some longer rides and got more experience, I called all my tri-athlete friends for tips. I got loads and would agree that eating all the way around is good one.

All the hotels were full near to the event, so we booked an airbnb, which we’d never done before. I can't lie , I was really, really nervous. The last week I suddenly realised how big an event it was and petrified. Anyone who talked to me knew it.

The day before Ride London, is Freecycle an 8 mile event around the City. I don’t like missing out and having gotten up super early to catch a 6.30 train, we were

there nice and early. It was lovely to ride the city, with an early lunch stop in Hyde Park at 11.30.

Not being local Londoners, we had to pick up keys for our accommodation and register and collect all our Ride London info from Excel. So we biked to both through some crazy traffic and along some more relaxed cycle routes. We were already clocking up the miles and this was just the Saturday. Not sure if it was the right prep, but it was fun. 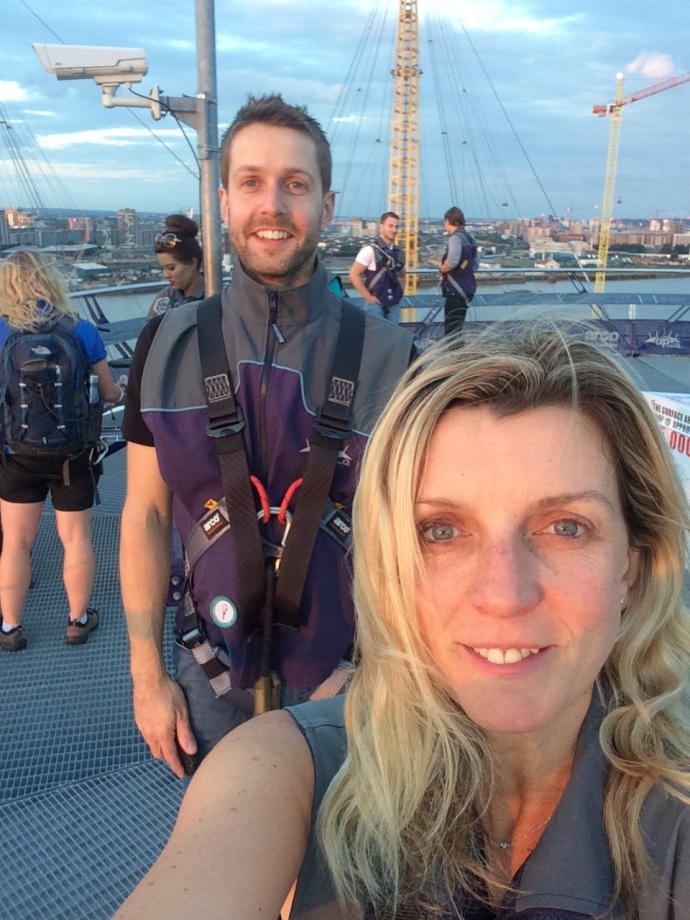 To max out the weekend, I’d also booked us in to climb the O2, which, with hindsight, was maybe one thing too much. But it took my mind of the event the next day and as we’d climbed the Sydney Harbour Bridge nearly ten years ago on our honeymoon we had to do it. The O2 was great, the climb felt good on my legs, I was stretching out most the course and the sights were magnificent. There was a festival happening in Greenwich and I have to say I enjoyed hearing all the tunes from the top! It was so amazing to see London at dusk. The sun was setting and it was the end to a great day. My nerves peaked, but having beer really did help, thanks Carly for that!

I actually slept well and before I knew it, it was 5am. I got up, had my porridge and a brew (ritual training day energy for me). We loaded up and off we went for the 15 minutes “cycle” to the Olympic Park and followed the signs to my black wave starting point.

I was still incredibly nervous. There was a lot of people eating bananas and preparing. I felt everyone looked way more serious than me. I was wearing trainers. (I could count to ten the amount of people in them) We still had a wait before we moved toward the start to go at 7.30am. Once we were going I was fine, you go quicker than you think and before you know it you can see Canary Wharf and all the iconic City buildings, which was amazing. Closed roads = safety and it is pretty awesome. You cycle past pretty quickly, it’s good to look up!

We were at mile 10 by the time we got back into Central London which was great, I loved the river part and then going past all the famous London landmarks, and through all the posh streets. Especially near VB’s shop on Dover Street, the Ritz, I’m a sucker …..

The next ten miles we headed toward Richmond Park, which was just fabulous and for me one of the highlights. It was early in the morning, the temperature was just perfect, the sky was blue, the park looked amazing. It was at that moment, I could say I LOVE cycling…I get this.

The next route takes you though the Heart of Surrey we saw our friends and stopped at the first hub to refuel at mile 25. We had brought with us James’ mum’s homemade flapjacks (loads of them) and some sweets.

But we picked up bananas, more flapjacks, Soreen and some energy gel things and rehydration juice. The volunteers were quick and super helpful. They did a great job. Well done!

From here we headed deeper into Surrey, where you go through some wonderful towns and villages. So many people come outside for the day. They put their sofas on the front garden and cheered you on. It was fab.

By the point of mile 40 we had to stop - something had happened (apparently a crash) so we pulled into a handy water station on a cricket club. We sat in the shade (it was hot at this point) ate more, stretched and lay down to relax a little. No one knew exactly what was going on, but no one was going anywhere. We had a long wait, we think we were there for over an hour and a half before starting again. It doesn’t help your legs resting that long, things start to seize up. It's a bit frustrating but at big events I guess anything can happen.

There were signs of some slow movement down the road so we got back to it. There was a slow walk for a while and then finally back pedalling again. On we went and up the first real climb of many, at the tope was another handy hub stop. Due to the time we had already spent, this was a flying visit and we were back down the hill to the big one, Leith Hill. However, as we approached the bottom we were stopped again. Another crash. This time we were all on a small road with hundreds and hundreds of cyclists. People began to do the Mexican wave and shout out “alan” and “dan” it was funny. We were there about 30-40 minutes and began walking up in waves before we could cycle again.

Leigh Hill is as epic as they said it would be, I wished I’d trained more for hills, but once you make it to the top, it feels like you get ten miles of down, it’s well worth it. You feel you are going so fast you can’t stop. It’s exhilarating but also scary as hell. You keep thinking the faster I go the more I will get to the next mile.

Having refuelled again at mile 65. With all the delays adding up and needing to make a 5.30 train from Euston to get us home to Manchester we made the tough decision to cut out Box Hill.

We got to mile 70 before we knew it and we were back into some quaint and idyllic towns you would read about in novels. The people were all making a day of it, singing and dancing outside with drinks, some had clearly been there a while! They would cheer you on. Charities raised millions last year from the event last year. It’s a great event. I just felt privileged to be there.

The last thirty miles was like the first, fewer hills and fast pace. It was great to go through Kingston (I’d like to go back) and head back towards the City. My legs were aching but you know you are so close, it doesn’t really bare thinking about.

The City came quick and fast, Wimbledon Hill comes out of nowhere and it’s hard, especially after the bigger climbs, but again, it’s rewarding, as there are some lovely slopes back down. We made one last drink stop and refuelled on more bananas and fluid and cycled back into town. The last few miles were pretty tough, but it’s an incredible experience, being able to cycle past Downing Street, Houses of Parliament and come into the Mall to Buckingham Palace and have everyone wave and cheer you on in support. With a sprint finish across the line we got our medals and bags. And no time to waste we had a train to catch – so despite the tired legs and sore bum it was back on the bike for the 20 min battle to Euston. We made it though and ached all the way back on the train. Getting back on the bike at Manchester feeling cold, was really hard.

The feeling was amazing, I wasn’t really sure I could do it, but being with everyone else and just cycling was amazing. I was chuffed and relieved. I love my medal and feel privileged to have taken part in an event which stops the roads for little cycling people to have fun. It’s eco and it’s great exercise.

To summarise, it was an amazing weekend of activity and the ballot opens for 2017 next week. I know if I can do it, many others can (and should). Maybe book a few things more in advance than me and leave going back to Manchester till the Monday! But that medal and knowing you’ve cycled around most of London and Surrey - it’s well worth it.

Transitioning from 5k to 10k: How to progress your running!

Getting to know queen of running Dr Juliet McGrattan

Netball and its increasing popularity - the sport of choice for women

I love running so much I started my own club! - by Ann Currie